The overall objective of the project F-POLE was to study the diversity and distribution of marine-derived fungi in polar ecosystems, to relate these findings to environmental parameters and to begin to assess their overall importance for these ecosystems. Fungi are major components of the Earth’s biosphere, playing a pivotal role as decomposers and recyclers of nutrients across different environments. Information on the fungal biology and ecology in marine environments is, however, limited. Previous studies indicate a distinct diversity, including chytrids (fungi with swimming tails), which can affect algae and zooplankton communities. This interaction is thought to be a product of the parasitic lifestyle of many chytrids or their role as a food source. On account of these aspects, chytrids can be important components of aquatic ecosystems with a potential to shape capacity and function at the base of the food web. Investigations within this project were therefore focused on the diversity and distribution of this fungal group.

Environmental samples have been taken during summer in the Arctic Ocean and the Southern Ocean, respectively. During the project, different water depths, covering the surface water, the chlorophyll max (where the major phytoplankton groups reside) and the under-ice water were sampled and DNA was extracted for characterization. Two phylogenetic informative markers were sequenced in order to study the marine fungal community (ITS2 region) as well as the wider microbial eukaryotic community (V4 region). This approach allowed for the identification of putative distribution patterns. Furthermore, relationships between marine-derived fungal community structures and environmental parameters were elucidated using statistical tests.

Overall, the project provided a comprehensive dataset of environmental DNA barcodes of marine-derived fungi from polar regions and thus contributed substantially to the research community by complementing important information on chytrid diversity and distribution. This project fits into our wider work to understand the phylogenetic diversity of the Fungi and their close relatives and how they ecologically interact with others in aquatic environments. 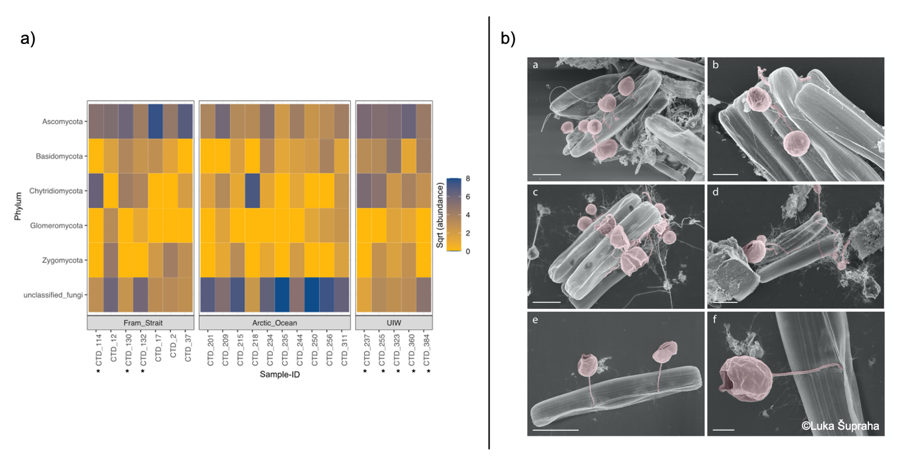 a) Distribution of fungi (>=1% abundance) based on the ITS2 marker gene sequencing identifying putative patterns of fungal diversity across the sampling sites including the deep chlorophyll max (DCM) of the Fram Strait and the Arctic Ocean and in under-ice water samples (UIW). Sampling stations marked with an * were characterized by low salinity b) Scanning electron microscopy (SEM) images of pennate diatoms from melt-pond aggregates putatively infected with chytrid-like fungal pathogens: (a–f) false-colour red shows chytrid-like [zoo-]sporangium structures. f is a sub-section of e. Scale bars: a, c, d, = 5 µm, f= 2 µm; e = 10 µm.